Worcester Cathedral has two royal tombs.  One belongs to Prince Arthur (Henry VIII’s older brother and first husband of Katherine of Aragon), and the other to King John.  John’s rise and fall occupies a prominent place in English medieval history.  When he inherited the crown from his illustrious brother, Richard the Lionheart, in 1199 he succeeded to the kingdom of England, the lordship of Ireland, the dukedoms of Normandy and Aquitaine, and the county of Anjou.  However, by the time of his death in 1216 John had lost most of his French territories and the loyalty of his leading barons.  Today he is best remembered for signing the Magna Carta, a ‘Charter of Liberties’ drawn up by the barons to limit the authority of the monarch. 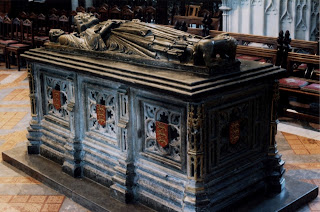 King John's tomb in the chancel of Worcester Cathedral


Less well-known is John’s connection to Worcester.  The Cathedral Library holds some fascinating documents and artefacts relating to the king, including his will, his thumb bone and a fragment from his burial clothes.  John was a frequent visitor to the town.  He is known to have stayed here on at least nine occasions, both as an envoy of his brother and also as king.  Worcester was an important garrison town in the Middle Ages, close to the border with Wales.  Indeed, two of John’s visits (in 1189 and 1209) involved negotiations with Welsh noblemen.  Although we only have records of the visits he made for political purposes, we know that the king had a special affection for the area.  The royal forests of Kinver and Feckenham were among his favourite hunting grounds, and he chose to spend the Christmases of 1207 and 1214 at Worcester.  John was also attracted by the shrines of the Anglo-Saxon Saints Oswald and Wulfstan, the latter of whom was canonized during the king’s reign.  In his will John requested to be buried between the shrines, even though Worcester had formally declared for the barons against the king.

King John’s will is thought to be the earliest surviving copy of a royal will in England.  Although small, it is one of the treasures of the Cathedral archive.  Among the signatories were some of his most loyal and trusted friends.  They included William Marshal, Earl of Pembroke and William de Ferrers, Earl of Derby. 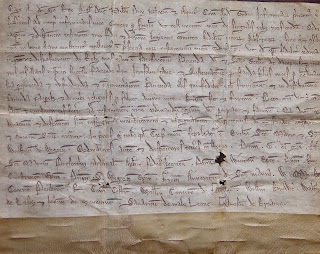 
Alongside this document we also have relics taken from the King’s tomb during an antiquarian study in 1797.  One of these is a thumb bone.  Could it have come from the hand which signed the Magna Carta?  At the same time the bone was removed workmen recovered fragments of cloth believed to be part of the King’s shroud and hose.  So next time you see John appearing in ‘Robin Hood: Men in Tights’, remember that the originals can be found here in Worcester Cathedral Library! 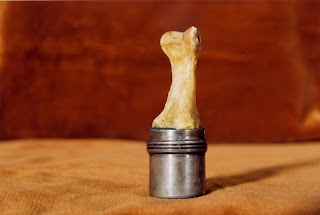 The thumb bone taken from John's tomb
Posted by Worcester Cathedral Library at 15:50

To find out about our conservation projects click on the image